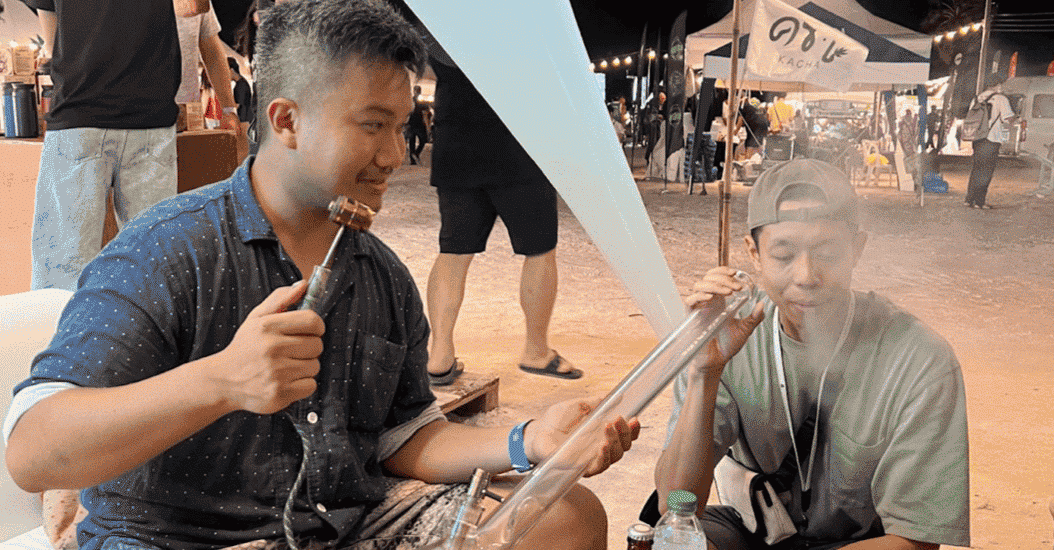 Thailand’s politicians erroneously believed that they could establish cannabis regulations before removing the plant from its list of narcotics. The deadline came and went, and a two-day event called “Legalaew”—which translates to “Legal Already”—happened on June 11th and 12th.

Arriving at the Highland event, I didn’t know what to expect. I’d visited Chopaka earlier in the day to purchase my first gram of legal flower. I figured I’d treat myself and opted for a gram of End Game at nearly $30USD. Prices are likely to decrease once the hype dies down a bit. But I have to say, it’s one of the highest-quality nugs I’ve acquired in the Land of Smiles.

Thailand has come a long way from the compressed—yet impressively potent —brick weed tied together with bright red twine. And I suspect that with more influence coming in from abroad, we’ll see even more high-quality herb hitting shelves nationwide.

Ominous clouds and heavy rainfall characterized the first few hours of Legalaew. Shoulder-to-shoulder under a large white tent with other passionate consumers, I wondered whether the event would actually happen.

An hour later, the rain lightened up and the skunky scent of perfectly cured ganja filled the air. With no laws surrounding the plant and public nuisance laws remaining the only tool for policing consumption, it was nearly an absolute free-for-all experience packed with good vibes and smiling faces.

The only thing stickier than the herb being smoked were the mud and sand beneath our feet. It was absolutely caked up from the rain and had everyone watching their steps.

The event took place in the middle of Nakhon Pathom, around an hour and a half from central Bangkok. Joints and bongs were passed around liberally in the open without concern for any consequences, which is something any consumer would appreciate.

This was by far the most freedom I’ve seen at a legal cannabis event, with the excitement of it all increasingly apparent with each step deeper inside. But it wasn’t solely consumers enjoying the carefree atmosphere: Thai musicians performed live on stage. Some wore traditional Rastafarian garments. Others played traditional Thai instruments to accompany their ganja-themed music.

Bloom was in attendance, its simple branding and bright tent were easy to spot. They had various THC- and CBD-infused products available. Treekings OG had two stands, both of which were selling infused snacks and lit with neon lights by the time night came. OG Papers was serving flower and Siam-style hemp papers.

Interestingly, there was a massive installation of the traditional brick weed commonly found throughout Thailand. The majority of this sativa comes in through the borders.

Most who have experienced cannabis in Thailand have done so with brick bud. I’d say this reflects on Thailand’s past and is essential to remember as we progress forward in this space.

I got a chance to talk with Weerachai, owner and operator of Bong Thai, who has been making bamboo bongs for the Bong Thai brand for the last three years. He and his wife, Nilnapa, sell their assortment of handcrafted bamboo bongs and tie-dye fabric products at cannabis events in the Kingdom.

Since Thailand began changing its laws around two years ago, they’ve seen a significant increase in the demand for their Thai-traditional products.

I also had the pleasure of speaking with Kenny, Boom, and Broccoli from Kacha, a company that started producing cannabis concentrates at the beginning of the pandemic right after vitamin E and heavy metals in shoddy vape cartridges sparked fear in the hearts of terp lovers globally.

“We started off saying that we should create a Thai brand that doesn’t contain any harmful filler product, no filler, no heavy metals. All of them have to be checked here by us,” Kenny explained. “We check that the product is 100% clean and we then move on from there.”

The Kacha team understands what it takes to establish a market that lacks education. They’re working tirelessly to support consumers in Thailand, as well as outside of the Kingdom.

“We’re trying to build a market at the moment, and we have multiple sales happening around the world, mainly in California. But first, we have to build an idea here, a beautiful image of a Thai brand,” Kenny said. “We’re hosting events now. We hosted a yachting experience last month, and we used this product called Zenco, which is a cannabis concentrate in a drinkable form. The yachting event was fun, successful, and one of the first cannabis yachting experiences in Pattaya and Thailand. We might host another one soon.”

Equally important to mention is the Rescue & First Aid booth on-site. They had a few situations over the course of Legalaew. Fortunately, none were too serious.

“It’s our responsibility to make sure everyone is safe at the event,” explained the head of Rescue & First Aid, Bank. “On the first day, we had a woman who was crying and too high in the water after eating an infused brownie. We went in and took her out of the water, checked her out to make sure she was stable, but she was all right after so we didn’t need to send her to the hospital.”